Some Movement on Racial Justice

As will be discussed further below, there is a huge racial divide when it comes to attitudes towards the criminal justice system in general, and the police is particular, with blacks, and to a lesser extent Latinos, believing they experience far less equality and equal treatment than white Americans. There has, however, been some progress. As the chart below shows, significantly more Americans now believe that the criminal justice system is biased against blacks than was the case in earlier years. Between 2007 and 2015, the percentage increased by 13 points, from 36 percent to 49 percent. Between 1995 and 2015 it increased by almost 30 points, and for the first time more Americans believe the system is biased than fair. 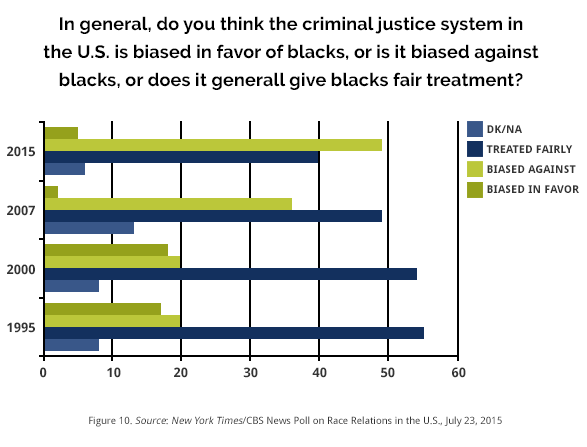 As one would expect, blacks are much less sanguine about fairness in the criminal justice system. In 2015, 77 percent of blacks believed the system was biased, as compared to 44 percent of whites, still a minority.