At the same time as punitive sentiment is ebbing, the public is showing considerable support for rehabilitation and alternatives to incarceration. Criminologist Angela J. Thielo has pointed out that this is not a new phenomenon:

Thielo and several colleagues conducted a survey of Texas voters in 2013 to gauge support for reforms, some of which had already been enacted by the state legislature. Because of its comprehensiveness and the fact that respondents are from a conservative state known for its punitive sentiment, this research is worth describing in some detail. Survey questions probed the following issues:

The results of the survey demonstrated that Texans support rehabilitation as a correctional goal. In fact, rehabilitation was the leading choice of possible goals, selected by more than a third of the sample. 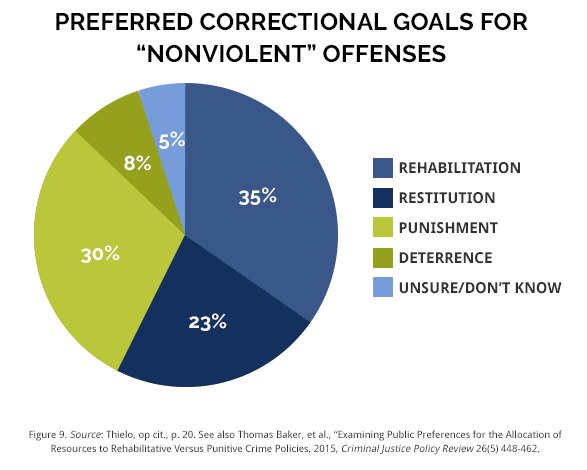 Given a choice between prison and “probation and treatment programs” for “first-time nonviolent offenders,” an overwhelming majority (77 percent) chose the treatment option. Even when the offender was described as a “repeat criminal offender,” a majority of respondents (62 percent) said they would rather spend money on “funding effective education and treatment programs” rather than spend money on the prison system to keep repeat offenders away from the public for longer periods. Responses to the set of four alternatives to incarceration for nonviolent offenders were also lopsided, with between 65 and 85 percent in agreement. Even majorities of conservative Republican white males approved of the four alternatives to incarceration. The researchers concluded that “taken together, these findings indicate that substantial consensus exists in Texas favoring the use of alternatives as opposed to prison for nonviolent offenders.”

Other state surveys produced similar results, confirming the finding that the American public now supports approaches based on prevention, rehabilitation, and reintegration:

Widespread support for prevention, rehabilitation and reintegration indicates that the idea that people can change and deserve a second chance is a core belief, and one survey asked this question explicitly. In a national survey of voters commissioned by the ACLU respondents were asked which statement they agreed with more:

“People who have committed serious crimes can turn their lives around and move away from a life of crime with the right kind of help.”

“People who have committed serious crimes are unlikely to change and will almost always be a danger to society.”

The first statement was preferred by a 2 to one margin, 59 percent to 31 percent.