Racial Divide in Attitudes Towards the Police

The high-profile police killings of unarmed black people and the protests that followed generated a spate of public opinion research during 2014–16. The big takeaway is that although these events produced some movement among some white Americans towards a greater appreciation of the systemic racism in law enforcement, the black/Latino-white divide on attitudes towards the police remains deep and wide. There is also a wide gap based on political affiliation, with Democrats moving much further along than Republicans, with Independents in between.

Confidence in the police as an institution

In June 2015, Gallup released the data from its annual “confidence in U.S. institutions” poll which includes a question about the police. The article accompanying the poll results was headlined, “In U.S., Confidence in Police Lowest in 22 Years.” Fifty-two percent of the public had confidence in the police as compared to a high of 64 percent in 2004. But a closer look at the demographic breakdown reveals only a three-point drop in confidence among whites, from 60 percent in 2012–13 to 57 percent in 2014–15, compared to a seven-point drop among nonwhites, from 49 percent to 42 percent. The biggest drop in confidence was among Democrats: from 55 percent to 42 percent, a 13-point drop. Among Republicans, confidence actually went up by one point, from 68 to 69 percent. A YouGov/Huffington Post survey conducted in July 2015 showed that when asked, “Do you have a favorable or unfavorable opinion of police officers in your community?” 65 percent said “favorable” and 25 percent said “unfavorable” with the balance responding “unsure.” Again, the racial differences are extreme: 70 percent of whites said “favorable” compared to only 43 percent of blacks and 49 percent of Latinos. Fifty-seven percent of Democrats said “favorable” compared to 81 percent of Republicans.

Whites and people of color report very different subjective responses to encounters with the police. Half of whites say they have “a great deal of confidence” in the police to gain the trust of those they serve compared with only 22 percent of blacks. Whites are much more likely than blacks or Latinos to say their experience with the police has been “mostly good.” 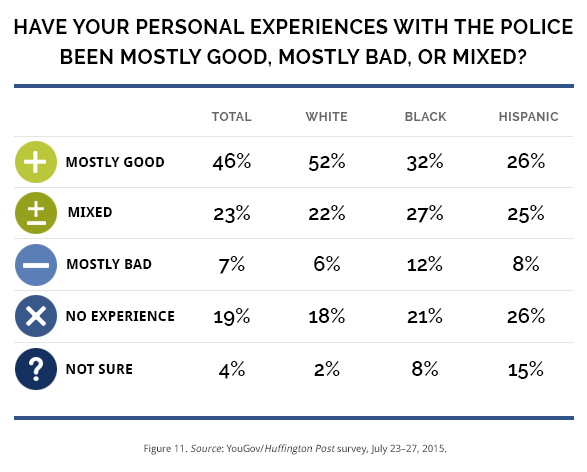 The striking difference in response to the following question shows how, when it comes to the police, black and white Americans occupy different realities: 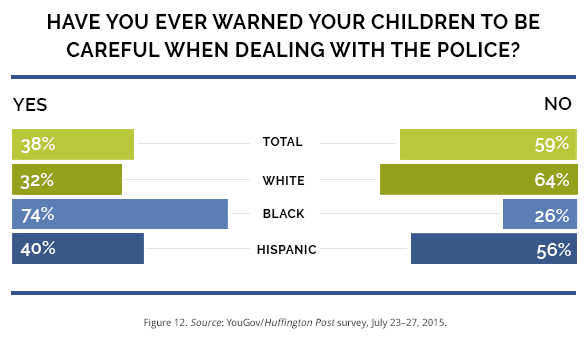 Do the police treat everyone equally?

People of color and whites have very different assessments of whether the police treat everyone equally: 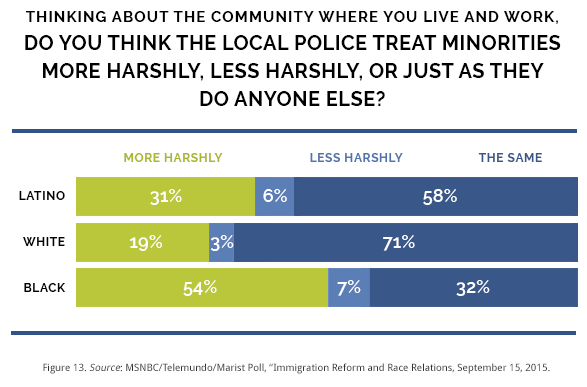 Responses to the following question about “police in most cities” reflect both the racial and the partisan divide: 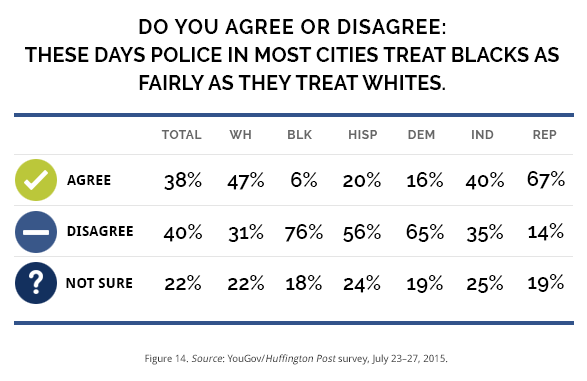 White responses to a similar question posed by the Public Religion Research Institute at about the same time were somewhat different. Asked whether they or agreed or disagreed with the statement, “Police officers generally treat blacks and other minorities the same as whites,” 50 percent agreed, but 48 percent disagreed, suggesting that white Americans are evenly split on the question.

Americans today are a bit more likely to believe that blacks are treated unfairly “in dealing with the police, such as traffic incidents” than they were a decade ago. In 2007, 37 percent thought so; by 2015 43 percent thought so. In response to the question, “In general do you think the police stop people of certain racial or ethnic groups because they believe that these groups are more likely than others to commit certain types of crimes, or don’t you think this happens?” 65 percent say it happens. But in response to another question in the same survey about the use of deadly force, a slight majority denies race plays a role:

Forty percent believe the police are more likely to use deadly force against a black person, but 51 percent believe race does not matter. The racial divide is stark in responses to both of these questions. In the first instance regarding “police stops,” 61 percent of whites think racial profiling happens compared to 88 percent of blacks. In the second instance regarding use of deadly force, the comparable figures are 33 percent of whites compared to 84 percent of blacks.

Divisions based on race are also reflected in surveys that have probed attitudes towards police accountability. According to a CNN poll taken shortly before the announcement of the Missouri grand jury’s decision not to indict police officer Darren Wilson for the death of Michael Brown, 54 percent of nonwhites (blacks, Latinos, and Asians) said Wilson should be charged with murder, while just 23 percent of whites agreed. A December 2014 poll by CBS News probing reactions to both the decision of the Missouri grand jury and a Staten Island grand jury’s decision not to indict NYPD officer Daniel Pantaleo in the death of Eric Garner showed the same racial divide: 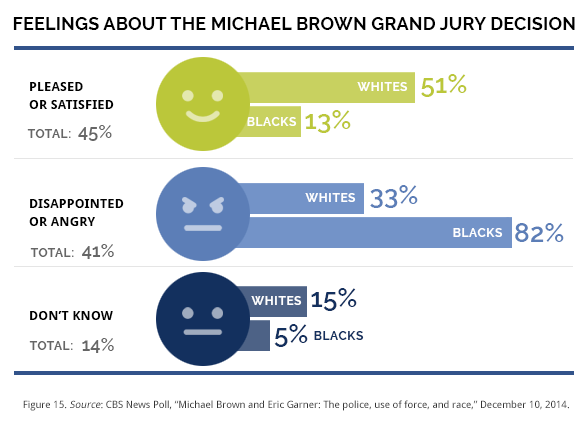 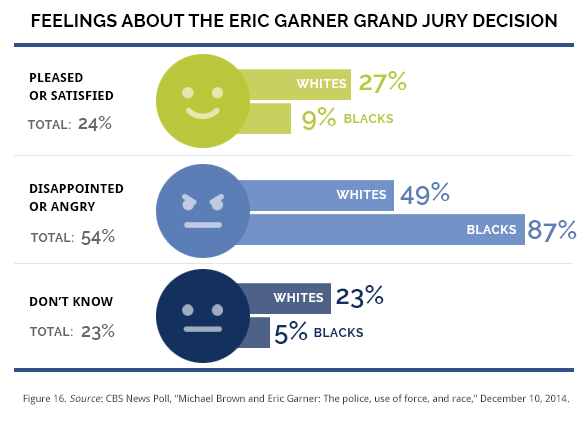 In response to the question, “From what you have heard or seen about Black Lives Matter, do you mostly agree or mostly disagree with Black Lives Matter, or don’t you have an opinion either way,” overall 34 percent say they mostly agree, 24 percent say they mostly disagree, and a relatively large percentage, 38 percent, say they don’t have an opinion. Blacks, Latinos, and whites differ in their assessments, with black Americans views much more positive than whites and Latinos. Thirty-one percent of both whites and Latinos say they “mostly agree” compared to 65 percent of blacks. The same percentage of whites and Latinos say they “mostly disagree” (27 percent) compared to only 5 percent of blacks. And approximately a third of all three groups say they don’t have an opinion either way.

Some sense of the basis for white and Latino disapproval of Black Lives Matter is revealed in another question in the same survey. When asked to choose between the following two statements:

the same division appears, with 65 percent of blacks choosing (a) and 59 percent and 57 percent of whites and Latinos, respectively, choosing (b).

Americans are more united when it comes to some of the policing reforms under public discussion. A 60 percent majority of Americans say they oppose racial profiling by the police and support a ban on the practice. Majorities of all groups (62 percent of whites, 71 percent of blacks, and 67 percent of Latinos) agree that “policies and system-wide training programs should be put in place to prevent” racial profiling. Large majorities of both blacks and whites (92 percent and 86 percent, respectively) support the use of outside prosecutors in cases of police killings of unarmed civilians. Eighty-eight percent and 87 percent of blacks and whites, respectively think the public should be allowed to videotape the police. And 93 percent of both blacks and whites favor requiring on-duty police officers to wear video cameras “which would record events and actions as they occur.”