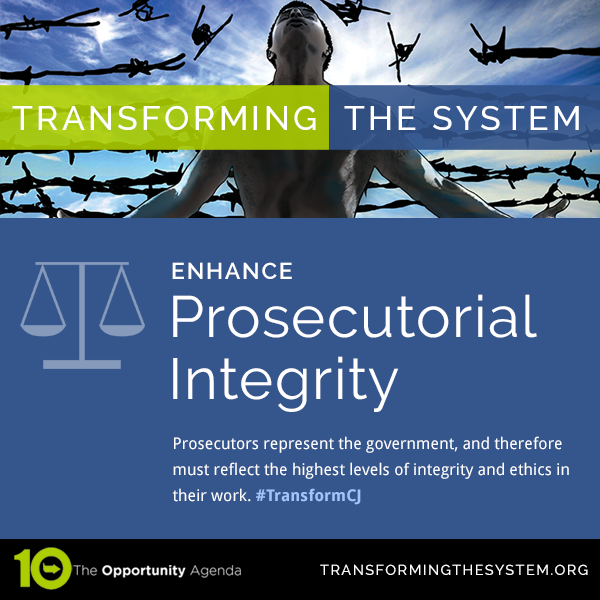 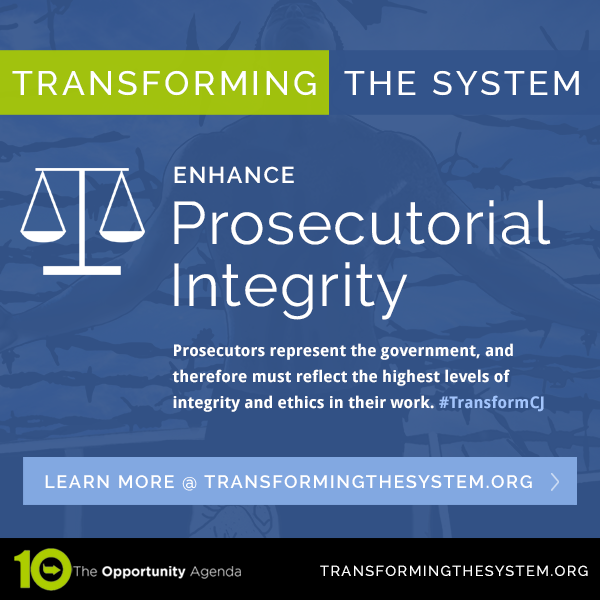 Prosecutors represent the government, and therefore must reflect the highest levels of integrity and ethics in their work. We expect our prosecutors to be unbiased, fair, and committed to transparent administration of justice. Unfortunately, studies show that prosecutors are frequently biased against low-income defendants and defendants of color. There are currently inadequate systems in place to prevent these prosecutorial biases.

Moreover, prosecutors are often measured by performance standards that prioritize the volume of prosecutions and the rate of conviction over the quality of cases sought for prosecution. This creates an incentive to increase prosecutions, and accordingly incarceration, even where prosecution may not be the most approach for a particular matter. This has resulted in prosecutors unintentionally relying upon prosecutions of low-income defendants and defendants of color to meet the cultural and political pressure to increase prosecutions and convictions. Prosecutors should instead be incentivized to use qualified and effective diversion programs as a tool for promoting safe communities and ensuring arrestees receive drug and mental health treatment when needed.

While all criminal justice actors should acknowledge their role in creating mass incarceration, prosecutors play a particularly crucial role in ensuring that incarceration is not a used as a substitute for social services.

1) Be Smart on Crime

The Department of Justice (DOJ) should publish district data concerning the U.S. Attorneys' compliance with the Smart on Crime Initiative, the DOJ initiative to conduct a "comprehensive review of the criminal justice system in order to identify reforms that would ensure federal laws are enforced more fairly and . . . more efficiently" and review case selection and charging practices to ensure that only the most serious offenses with a substantial federal interest are being pursued.

Local governments, prosecutors' offices, and the federal and state legislatures should raise the charging standard by requiring that prosecutors consider the social costs of mass incarceration when determining whether it in the “interests of justice” to charge for a case and requiring prosecutors to charge crimes according to the likelihood of conviction rather than probable cause.

Local governments, prosecutors’ offices, and the federal and state legislatures should encourage effective and fair practices including prioritizing the prosecution of more serious offenses; adopting pre-booking and non-arrest diversion programs and restorative justice initiatives; and creating performance review standards that reward diversion and the removal of racial inequities.

4) Encourage Discretion Not to Prosecute

The American Bar Association should revise Standard 3-3.9, which provides guidelines for prosecutors to dispose of a pending matter, to affirmatively encourage prosecutors to exercise discretion not to prosecute less serious acts.

DOJ, Congress, local and state legislatures, and prosecutors' offices should ensure that there is fairness in the prosecutorial decision-making process by requiring routine implicit bias training for prosecutors; routine review of data metrics to expose racial disparities with the aim of promptly addressing them; and the incorporation of racial impact review in performance review for individual prosecutors. DOJ should issue guidance to prosecutors on reducing the impact of implicit bias in prosecution.

Local governments, prosecutors' offices, and the federal and state legislatures should use recidivism rates, diversion rates, and other metrics to evaluate prosecutor performance rather than the number of prosecutions or the rate of conviction.

In addition to pressuring government officials to support the above actions, advocates, activists, cultural workers and artists, and civil society should invest time and resources to engage in prosecutorial elections, highlighting the power of local prosecutors and increasing their accountability to the public.

Local governments, prosecutors' offices, and the federal and state legislatures should focus on the monitoring, training, and development of prosecutors to discourage the use of incarceration, including creating internal guidelines to channel discretion and requiring written justification for decisions to prosecute.

When a member of our community faces trial within the criminal justice system, we want to know that the system is operating in a fair and honorable manner. Prosecutors represent the government – and in extension, us - and therefore must reflect the highest levels of integrity and ethics in their work. We expect our prosecutors to be unbiased, fair, and committed to transparent administration of justice.

Unfortunately, studies show that prosecutors are frequently biased against low-income defendants and defendants of color. And currently, there are nowhere near enough systems in place to prevent prosecutorial biases.

Transparency and accountability measures can provide incentives for prosecutors to uphold the highest standards of integrity. For example, by collecting data about which charges prosecutors decline to pursue, or which sentences they request, supervisors can provide more effective guidance to junior prosecutors. They may discover, for example, that some lawyers are seeking more severe penalties for some defendants than for others who have engaged in similar acts. Therefore, data and transparency in the prosecutorial decision-making process are crucial to ensuring integrity.

For more information on the role of prosecutors in mass incarceration and ways to reform the system, check out: